Stages – The Musical Theatre Festival At Sea from Floating Festivals

Stages – The Musical Theatre Festival At Sea from Floating Festivals

Confession time: I completely underestimated the Stages Musical Theatre Festival At Sea from Floating Festivals. Despite having reported on the extensive programme of Q&As, workshops, cabarets, open mic sessions, theme nights and first-class headliners in the run-up to the event, I had no idea of the quantity and quality of what was in store.

This is truly a festival (the last time I was as busy was at this year’s Edinburgh Fringe) in which you can immerse yourself in all things musical theatre from 9am in the morning to way beyond your bedtime. It is four days and nights of musical theatre heaven – all on a luxury cruise liner – and for fans passionate about the genre it doesn’t get much better than that.

I should probably add here that your cruise can be as busy or chilled out as you wish it to be, there’s plenty of other activities to momentarily distract you from the show tunes (shopping, the spa, rock climbing, ‘surfing’, hot tubs, swimming, or just reading a book as the ocean drifts by), but the musical theatre-themed line-up is hugely impressive.

So a few details about logistics: We set sail on Royal Caribbean’s Explorer Of The Seas from Southampton on a Monday afternoon and were at sea for four nights, returning first thing Friday morning. The Tuesday and Thursdays were sea days and on Wednesday the plan was for the ship to dock in Dublin. However, adverse weather conditions meant that the destination changed to Cobh, 14 miles from Cork.

I’m sure there were a few punters who were disappointed not to see Dublin, but it is unlikely the Wednesday excursion was the major attraction for anyone joining this cruise. More likely it was the incredibly talented performers and creatives lined up to entertain us during these wonderfully enjoyable four days at sea.

These of course included the evening headline acts appearing in the largest auditorium on the ship, the Palace Theatre – Alfie Boe, Sheridan Smith, Collabro, Joe Pasquale and Avenue Q.

Shows were 50 minutes long and on the whole artists performed three times across the week in order that no one was left disappointed. All those customers I spoke to praised the improved organisation of the evening schedule which used coloured coded sea passes to indicate to people when their designated dinner/show slots were. This ensured everyone had the opportunity to see their favourite artist/show, no mean feat when you consider that there were 3,000 people onboard.

All of these headliners presented enjoyable sets, heavily influenced by the musical theatre theme of course, to the delight of their dedicated fans. For me, it was probably Sheridan Smith who made the biggest impression. The actress, singer and mum-to-be (she was happy to reveal news of her pregnancy to audiences on the cruise) brought each of the musical theatre characters she has played so far in her career to joyful life. It was very noticeable, in fact, how relaxed the artists were in this setting, acknowledging fans in the audience and often indulging in a bit of a banter. 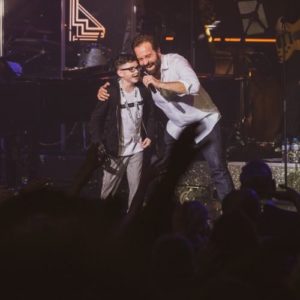 The other main performance venue was Studio B, converted from the room’s normal use as the ship’s ice rink. The room temperature could be a little chilly, but that didn’t seem to matter when there was such talent onstage.

Both these shows gave audiences a chance to not only hear fantastic vocals up close and personal, but occasionally be introduced to less familiar material – all in a relaxed setting. Barstow and Fearn were also back in the same space on the last evening of the cruise for the rather exquisite Wonderful: A Tribute to Stephen Schwartz.

Studio B was also the spot where I saw what was probably my favourite show of the cruise, Night Cap with Rachel Tucker and Paul Taylor-Mills. This piece took its title from the series of conversations that featured in Taylor-Mills’ first MT Fest UK, a season of new musical theatre which will take place once again in February 2020, but this time at London’s Turbine Theatre where he is now artistic director.

Taylor-Mills’ affection and respect for Tucker were evident during this all-too-short mix of chat and musical numbers, and the audience was on a similar wavelength. Tucker, currently of course in the West End’s Come From Away, was honest and entertaining as she reflected on her childhood and career and every performance was spot on.

Drew Baker, who curated an enrichment programme for Stages Festival, was responsible for a number of the performers appearing on the cruise, but he also should be congratulated for scheduling a wide range of other events, ranging from Q&As to the late-night Sing Easy sessions in the Star Lounge hosted by Tim McArthur. The latter were a big hit and produced some special memories for performers and audience members. 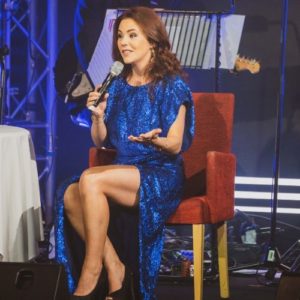 McArthur took charge of a number of the Q&As, including a particularly inspiring and moving conversation with Jenna Russell, who was also on hand for Discovering Sondheim in a session at the Palace Theatre. Apart from an impromptu number during Sing Easy, we didn’t get to hear Russell sing very much. I do hope that changes if she is in the line-up next year.

One of my favourite sessions was The Music of Billy Elliot, during which MD Phil Bateman discussed his work on the show from its very early stages and Steph Parry spoke about the joy of being part of the production and playing the role of Mrs Wilkinson. It was wonderful to hear Bateman teach the song ‘The Stars Look Down’ to the audience and hear the results sung by the impromptu choir.

I must also give a mention to dynamic duo Ferris and Milnes as well, a massive hit on the ship, so much so that every time I tried to catch their show in the rather bijou Schooner Bar it was standing room. I hope they are asked back next year and get to play a bigger venue!

Producers James Ibrahim (the host with the most), Jonathan Blackburn and Peter Taylor have come up with an irresistible package of entertainment and leisure for musical theatre enthusiasts and I have a feeling the event will go from strength to strength.

Many of the people I chatted to on the ship were on their second Stages cruise and had already booked up for 2020 (travelling on Anthem of the Seas). And who could blame them when you see the line-up for next year: John Barrowman, Lea Salonga, Ramin Karimloo, John Owen-Jones, Bonnie Langford, Marisha Wallace and We Will Rock You. Musical theatre heaven all over again.