Cruising back to the 80s with an at-sea music festival

Cruising back to the 80s with an at-sea music festival

Who needs a muddy field when you can get your festival fix at sea?

In true rock ’n’ roll style, pop heartthrob Tony Hadley is on stage knocking back Jack Daniels. His excitable banter indicates he’s having as good a time as the audience, who are dressed as iconic 1980s characters – anything from children’s performers to Freddie Mercury and Hi-De-Hi yellowcoats – while singing along to Spandau Ballet’s hits.

This is a typical scene on Floating Festivals’ Throwback. The previous night, Nathan Moore from boy band Brother Beyond had started off singing on stage and ended up freestyling in various parts of the packed room.

Royal Caribbean’s 3,400-passenger Explorer of the Seas has been sprinkled with 1980s fairy dust for the weekend and nostalgia is definitely on the itinerary. 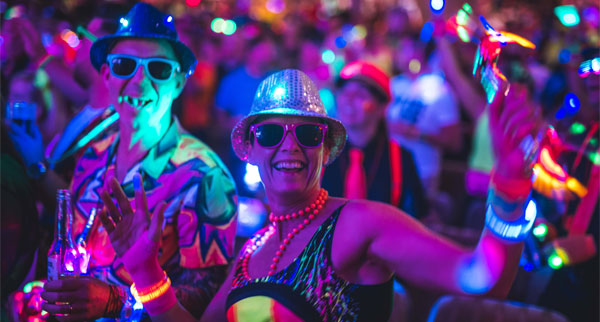 We’re cruising round-trip from Southampton to Le Havre, but rather untypically, the key attractions are to be found onboard and not ashore. And while all of the ship’s excellent facilities are available, the passengers are creating their own entertainment.

The party atmosphere is intoxicating and you quickly get used to the unexpected becoming the norm – a nine-foot Incredible Hulk knocking back pina coladas at the bar, downing shots in the lift and being showered with glitter on a dancefloor decked out with inflatable space hoppers and Rubik’s cubes.

“You might find yourself dining next to resident DJ Pat Sharp or squeezing into the lift with comedy legend Bobby Davro.”

As you might expect, this sailing is strictly for lovers of the idiosyncratic era that bought us mullets, mixtapes and shoulder pads. The decade’s music caters for all tastes and the headline acts are proof of this – reggae-pop group UB40, disco divas Sister Sledge and Tony Hadley perform to enthusiastic crowds in the Palace Theatre each evening.

But unlike those often untouchable 1980s heroes, this time round you just might find yourself dining next to resident DJ Pat Sharp or squeezing into the lift with comedy legend Bobby Davro. 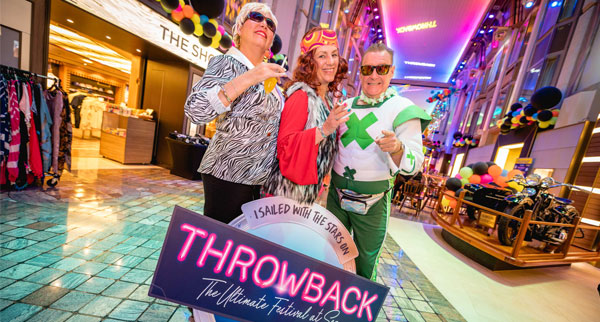 The theme nights – Freestyle, Neon, and Music and Film – are taken seriously by the mainly British crowd, who go all out to be creative and original. The drinking starts early and it seems that everyone is here to have as much fun as possible.

With 1980s tunes playing throughout the ship all day long, it’s a real party atmosphere – and anything goes.

Along with the Club Tropicana disco, the promenade is one of the liveliest parts of the ship for drinking and socialising, and surprises pop up everywhere and at any time, including dining room flash mobs, elevator karaoke and Star Wars characters at breakfast.

“Theme nights are taken seriously by the mainly British crowd, who go all out to be creative and original.”

Now in its second year, Throwback is gaining momentum among regular cruisers and those who’ve never set foot on a ship.

Floating Festivals chief executive Jonathan Blackburn says: “It’s introducing people to cruise who normally wouldn’t consider it. Our average age is early to mid-50s, but the decade was so strong for music that we also have fans in their 20s, and some in their 60s and 70s. You’ll find that Throwback tends to sell itself, thanks to our line-ups.

“We’ve invested heavily in the concept and now have lots of loyal fans, as well as some great high-profile acts talking to us who would never have previously dreamt of performing on a cruise ship.”

With more than 700 rooms already sold for October’s festival, music lovers will need to move fast if they want to join the most fun and flamboyant party at sea. 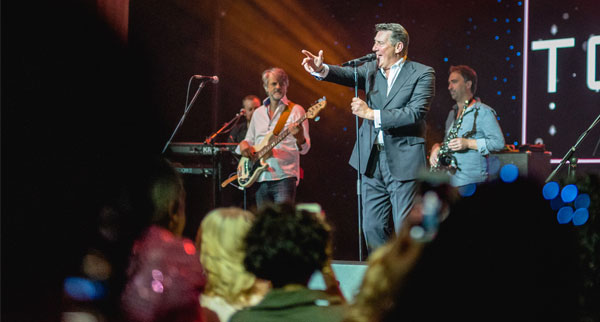 Q. What do you think of the Throwback festival?
A. Everyone is lovely and here to have fun. There’s great food and drink, stacks of entertainment and you don’t have to worry about getting home. It’s all on your doorstep, then you go to bed and the next morning, you start all over again!

Q. What’s your favourite part of the ship?
A. The theatre is incredible. I still get a kick out of music, so being on board is as much fun for me as for the customers.

Q. What’s it like walking around knowing people are here to see you?
A. If I had a pound for every time someone said, “Can I have a selfie?”, I’d be a wealthy man. I don’t want to shut myself away, I want to get involved and hang out with my mates.

Q. What are your favourite destinations?
A. Mauritius, as it’s where I met my wife, but I also love Los Angeles, New York,  Rome and Venice. We often rent a villa in the hills of Majorca, with only a goat or a donkey around. I’ve not been to India or China yet, but I’d love to go.

Q. What’s the one thing you can’t cruise without?
A. My washbag – it’s got the hairspray, razors, deodorant and aftershave. You’ve got to keep up standards, haven’t you?

Any cookies that may not be particularly necessary for the website to function and is used specifically to collect user personal data via analytics, ads, other embedded contents are termed as non-necessary cookies. It is mandatory to procure user consent prior to running these cookies on your website.